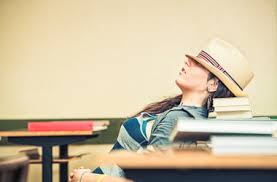 (How Stuff Works ) By Julia Layton —

Millions of college-bound high-school seniors, from across the United States, just lost interest in school.

January was a milestone on the traditional path to higher learning. For most U.S. colleges, applications were due. Early-decision candidates, who applied back in November, found out if they’re attending their first-choice schools. After years of studying, and homework, and showing up, they’re either in or they’re out. It’s finally out of their hands.

Unfortunately for some of them, it’s not, and there’s a third option.

As stated in the standard acceptance letter, admission is contingent upon satisfactory completion of high school, and colleges reserve the right to reverse their decision at any time. In a typical year, colleges revoke about 1 percent to 2 percent of their admission offers. Students may have included alternative facts on their applications, or been suspended for underage drinking, or exhibited some other lapse in integrity or judgment between the time they were accepted and the time they were due to start college in the fall.

More likely, they simply watched their grades fall off a cliff in the last semester of high school.

Sally Rubenstone, senior adviser and writer at College Confidential and former admissions counselor at Smith College, has seen students react very differently to the warnings about senioritis, an ailment that impedes the ability of high school seniors to put much effort into school or school-related activities.

“Over the years, I’ve seen some students worry obsessively about a rescinded acceptance when a straight-A average becomes clouded with a single B+,” she writes in an email, “but there are also those who stick their heads in the sand as they start to rack up multiple C’s or even D’s.”

The discovery of which is inevitable, because high schools send students’ final grades to their selected colleges at the end of the school year, and colleges look at those transcripts.

The kid with the B+ is fine. Admissions officers aren’t robots. But the A student turned C/D student may not be attending in the fall.

It may start with a “fear of god” letter. Per Tanya Caldwell at The New York Times, the one from Texas Christian University goes something like:

We recently received your final high school transcript. While your overall academic background continues to demonstrate the potential for success, we are concerned with your performance during the senior year … University studies are rigorous and we need to know that you are prepared to meet … [the] challenges. With this in mind, I ask that you submit to me, as soon as possible but no later than July 31 … a written statement detailing the reasons surrounding your senior year performance.

Joe, please understand that your admission … is in jeopardy. If I do not hear from you by the above date, I will assume you are no longer interested … and will begin the process of rescinding your admission …

Some students will impress with their statements; others won’t. The University of Washington in Seattle revokes 10 to 20 acceptances every summer, mostly based on final grades. At Northwestern, it’s more like one or two per year. Duke University rescinds about one acceptance each year, usually for behavioral offenses.

Try Not to Plagiarize Anything

According to Christoph Guttentag, the Duke dean of undergraduate admissions, students typically report the trouble themselves.

“Updating their application with any new disciplinary or legal standing is a condition of applying,” Guttentag notes in an email.

“In almost all cases,” he writes, “we ask for the student to come to campus for a conversation with myself and the Dean of Students” before determining “the appropriate institutional response.”

“It could range from no sanction at all, to withdrawal of the acceptance with no right to reapply, and everything in between,” writes Guttentag.

Generally speaking, lapses of character go over poorly in admissions offices, evidenced by a few very public revocations. Blair Hornstine lost her acceptance in 2003 when it came out that the New Jersey valedictorian had plagiarized articles she’d written for a local paper. (Around the same time, Hornstine famously sued her school to prevent it from naming a co-valedictorian, and won.)

In 2016, the University of Dayton in Ohio un-accepted Massachusetts teen David Becker after he pled guilty to sexually assaulting two women. The year before, two community-college basketball stars lost scholarship offers to Florida A&M when it came out they’d submitted forged transcripts. (Their coach has since been arrested for falsifying the documents.)

Most offenses are less newsworthy. An embellished activity list. Underage drinking during an overnight orientation on campus. A’s that became D’s after January.

Every Case Is Unique

College Confidential’s Rubenstone urges students to be proactive. Some decisions to rescind can be subjective, and students have a narrow window for affecting the outcomes. If a grade starts to slide, let the college know as soon as possible. By the time the school finds out on its own, it’ll be too late to enroll anywhere else: Students commit to schools, and withdraw all other applications, in May, before final grades come out.

Early decision candidates never even applied anywhere else, as required by the early decision contract. Violating that contract is grounds for rescinding admission.

Students should also keep track of any efforts to save a grade, such as peer tutoring, notes Rubenstone.

“Admission folks are far more likely to be forgiving of a drop in grades when they’re convinced that it’s not from slacking,” she explains. Even underage drinking isn’t a definite revocation.

“I remember a couple years ago a kid in my orbit actually had to go in person to … Duke, because he’d been caught drinking on a school trip,” writes Rubenstone.

“Duke made him squirm through a number of uncomfortable hoops,” she writes, “but ultimately he was allowed to show up in September.”