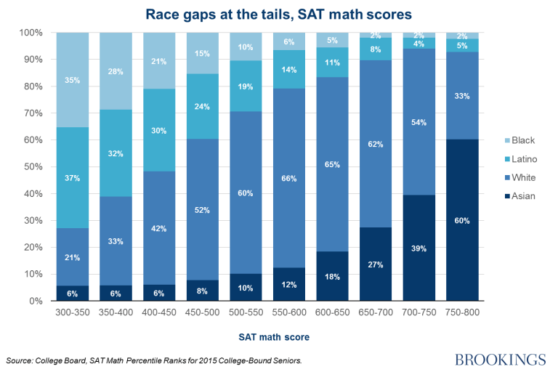 I’ve been following test scores for 45 years now the way other guys follow baseball statistics. But it’s kind of boring because nothing much changes, other than the ever-growing Asian dominance at the high end.

The gap was narrowing in recent years, but then it got wider the last two years.

Some of this is driven by programs to get more kids to take the SAT in the hopes of finding a few overlooked high scorers, but of course giving out free tests to poor kids mostly just expands the number of lower to middling scorers.

But, overall, the stability of the race gaps is pretty remarkable. They appear to be more persistent than, say, height gaps. The entire topic deserves a broader investigation than it has gotten.

There are some limitations to the data which may mean that, if anything, the race gap is being understated. The ceiling on the SAT score may, for example, understate Asian achievement. … A standardized test with a wider range of scores, the LSAT, offers some evidence on this front. An analysis of the 2013-2014 LSAT finds an average black score of 142 compared to an average white score of 153. This amounts to a black-white achievement gap of 1.06 standard deviations, even higher than that on the SAT.

The SAT is, more or less, the Blue State college admissions test, so it gets more publicity. But the ACT, the Red State test, has overtaken the more famous SAT in numbers taking it. The gaps are similar on both, however.

You often hear that racial gaps are really class gaps. To some extent that’s true, but people shouldn’t be so smug about asserting that:

However, a 2015 research paper from the Center for Studies in Higher Education at the University of California, Berkeley shows that between 1994 and 2011, race has grown more important than class in predicting SAT scores for UC applicants. While it is difficult to extrapolate from such findings to the broader population of SAT test-takers, it is unlikely that the racial achievement gap can be explained away by class differences across race.