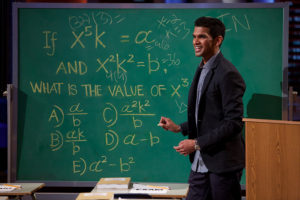 In his introduction video, Shaan Patel said he was from Las Vegas, Nevada. Standing in from of a classroom, Shaan said that he’s developed an educational program in order to help students achieve their dreams by getting into college. Shaan said that he grew up in a family of poor immigrant parents who came to America with $65 in their pockets. His parents had saved enough money to open their own Budget Hotel called the Sky Ranch Motel. the video showed Shaan visiting his parents at that same Hotel. His voiceover said that they instilled in him the value of education. Shaan said that he was able to get a full-ride scholarship at the University of Southern California. He said that he was currently getting his medical degree at that University, while also getting his MBA at Yale.

Shaan said that he would like to get an investment from the Sharks in order to take the business to the National level. He wants to help students achieve success just like he has. He said that it was important for him to succeed because his parents have invested so much in him, and he wants to make them proud. He called his future success his parents’ American Dream.

2400 Expert on Shark Tank walked onto the stage. Introduced himself to the Sharks, and said that he was seeking $250,000 in exchange for 2400 Expert S.A.T. Prep. Shaan said that numbers don’t lie even when men and women do. He asserted that by 14 million students have taken the SATs since 2005. He said that .02% or three thousand of those 14 million students had gotten a perfect score, and he was one of them.

Shaan said that the Sharks might be thinking that he was unable to help other students because he was just some genius. Shaan stated that he scored around average the first time he took the practice test, but he’s studied for the test and changed score 640 points to achieve the perfect 2400. He wanted to share his secrets to help other students prepare the way he did in high school. Shaan claimed that many of the test prep students have won millions of dollars in college scholarships, and has been admitted to Ivy League schools. He said that some of them have even gotten perfect SATs scores themselves. He stated that you wanted to expand his business Across the Nation, and ask the Sharks which one of them would like to Invest.

Lori told him that His story was impressive. Shaan thanked her and said that it was A6 week course. Until about six months ago it’s been in an in-person, classroom-style class in Las Vegas. Shaan stated that he just started offering online courses six months ago. He told the Sharks that those online courses were bringing in more Revenue than the in-person classes ever did. Robert wanted to know what their income looks like currently, and Shaan told him that they’d done 1.2 million dollars in sales In the last four years. Kevin asked if that was for the entire four years, and Shaan confirmed that it was. Shaan said that it was exciting because every year they’ve doubled their revenue. Half of that number came just in the last year.

Kevin told him that he knew everything about the test prep Market. He said that he was a shareholder in Kaplan as well as the Princeton Review. Kevin wanted to know what the cost of acquiring a customer. Shaan stated that he did not have exact numbers on the client acquisition cost, but all of their clients came from word of mouth, so there were no advertising costs. Kevin said that that made sense for the Las Vegas Market, that if he wanted to scale as an online course business and compete with the established competitors in the test prep Market, he would have to do more marketing. Kevin said that Kaplan and Princeton Review spend a lot of their marketing budget on customer acquisition costs.

Robert wanted to know how much the course cost for the average consumer. Shaan and told him that the in-person course cost just under $1,000 for 60 hours. Robert wants to know what the cost was online, and Shaan said that it was $600 for the same 60 hours. He said it was under $10 an hour. Robert wanted to know what the profit was from the 1.2 million dollars. Shaan stated that he made about $220,000. Daymond wanted to know what percentage of that number was from the online curriculum. Shaan stated that about 40% of the business was online, considering he just started six months ago. He said the students are now enrolling from all over the world, including China India and London. Robert asked if the online courses were live. Daymond followed up with asking if the online courses were recorded and packaged, or if it was a live instructor. Shaan said that he was the face of the company, so a lot of the students want to take a course specifically with him. He teaches one class a week online.

Shaan insisted that the reason why he was in medicine and getting his MBA was all about his SAT score. He said that the SAT score changed his life, After attending Urban public schools, and living in his parents Budget Motel. He said that the only reason why he was admitted to the prestigious universities was because of his SATs score. He said he received a half a million dollars and scholarships and got to meet the president of the United States. Kevin asked how the business would attract students that had never heard of Shaan. Shaan said that 2400 Expert was able to increase students SATs scores by 376 points in six weeks. Kevin was willing to admit that the product was safe. He wanted to know how he would be able to Market the product to customers who did not know that he exists, and would instead turn to known quantities like Kaplan and Princeton Review.

Daymond to ask him what he would be using the money for it. Shaan said that he wanted to open new locations in markets like New York, Los Angeles, San Francisco, Washington DC, Boston, and Philadelphia. Daymond stated that his entire online operation is teaching live, and Shaan let him know that he would be able to find other teachers to teach the class. Daymond wants to know if you would consider doing package contents instead of keeping the business model as live classes. Shaan told him that was a great question. He said that the customer wasn’t that high school student, but rather the High School parent. He insisted that parents were not interested in the pre-recorded online course because they didn’t trust it. Daymond said that he was currently in the online educational space. He stated that Shaan brought up a good point by saying that the parents are buying it, and making sure that it was taken by the students, who might not go in front of the computer every day for prepackaged content. Daymond said that he didn’t think that the business was scaleable. Daymond went out.

Lori asked Shaan if he wanted to be a doctor. Shaan told her that was a great question, and said that he had always wanted to be a doctor. Laurie followed it up with asking him if he wants to be a doctor or an entrepreneur. Shaan said that he’s always been in school, but he’s always been an entrepreneur her as well. Kevin stated that he was digging himself into a hole. He told Shaan that a Shark investor wants to hear that an entrepreneur would be totally committed to the business. He said it has to be oozing it from every pore for them to believe it. Kevin stated that he didn’t believe in Shaan Because he didn’t think that he could be a part-time entrepreneur, and Shaan hadn’t given him a solution for customer acquisition.

Shaan said that he was willing to give him an exact answer. So I realized in medical school that his business was taking off. He said that he’s focusing on his business and order to scale it. Lori stated that the electronic content is valuable, even though she understood that people wouldn’t just sit and do it. Lori stated that the electronic content would be a way to scale the business, even if only a certain percentage stick with it. Lori went out, indicating that Shaan didn’t know which direction he wanted to take as far as being a doctor or being an entrepreneur. Shaan said that he would be open to taking a licensing deal with either Princeton Review or Kaplan. Kevin stated that both companies feel pretty confident with their content, and most likely wouldn’t do that.

Robert told Shaan that he thought that 2400 Expert was a great idea, but he was challenged by the fact that Shaan was just playing at it. He wants to be both the doctor and an entrepreneur, And maybe also licensing the product. He told Shaan that business wasn’t a game. Robert let him know that a competitor who didn’t have the conflicting interests would beat him in the business world. Robert said that he couldn’t invest in the part-time entrepreneur, and he went out. Shaan looks shell-shocked. Kevin stated that the business was recession-proof, and one that he is known for years. He stated that Shaan’s problem was that he wasn’t a hundred and 10% committed, which is the type of person he was looking at investing in. Kevin said that he was willing to give money to people who would die for their business. Kevin went out, saying that Shaan was not the kind of person who loves to give up his life for his business.

Mark asked Shaan where he would like to be in 10 years.He said that Shaan would quickly attire of doing the business, and move on to something else. Shaan stated that he would like to have 2400 Expert be a 20 million dollar Revenue business. He followed that up by saying that he would like to work twice a week as a dermatologist. Shaan insisted that he was the hardest-working person that he knows other than his father. He watched his father work 16 hours a day in between two businesses, and he was able to get his work ethic from him. Mark said that he might be interested in acqui-hiring Shaan, but he had a few questions.

Mark asked Shaan if he would Continue his business even if he wanted to Medicine. Sean confirmed that he would. He said that the firm was his main Ambition. He even called it his baby. Mark let Shaan know that if he had other children, Mark wanted to be the god parent. Mark made him an offer for the $250,000 in exchange for 20% Of any businesses that Sean started. Shawn countered, stating that he would like $300,000 in exchange for 15%. Mark told him no. Sean Astin if he would do $300,000 in exchange for 20%. Mark said no again. Damon asked why he kept doing that. Sean looked confused, but he decided to take Mark’s offer.

Since 2400 Expert was on the most recent season of Shark Tank, it’s too soon if they will succeed or fail under Mark Cuban’s direction. 2400 Expert has changed it’s name to Prep Expert, and Shaan has been on Fox News and CBS. Shaan has published Kindle test prep guides, and his guide to SAT essay writing has made the Amazon bestseller list. 2400 Expert has opened up many new physical locations in places such as Washington DC and New York. It looks like the business is growing nicely.