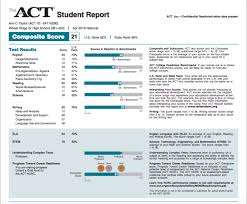 IOWA CITY, Iowa—Beginning this fall with the September national test date, ACT will no longer report ACT writing test scores on a 1-to-36 scale. To reduce confusion among users, the writing score will instead be reported on a range of 2-to-12, with 12 being the highest possible score. The new reported score will be the average of the four 2-to-12 domain scores on the essay.

The writing test itself, which was revised last year, will remain unchanged. The essays will still be scored using the same rubric, on four domains (ideas and analysis, development and support, organization, and language use and conventions) by two independent readers. Scores on the four individual domains on the ACT writing test will continue to be reported on a 2-to-12 range as they are now.

Last year, ACT revised the optional writing test and began converting results to a 1-to- 36 score scale to be consistent with the multiple-choice ACT test scores. This change, however, caused confusion among students who attempted to interpret their writing score in comparison to their multiple choice test scores. Each ACT subject test measures different skills, and many students earn higher scores on some tests than on others.

“Our customers have spoken, and we have listened,” said ACT Chief Commercial Officer Suzana Delanghe. “Converting the writing results to a 1-to-36 scale made sense conceptually, but in practice it created confusion among some students. We clearly understand that now, and we are making this change to eliminate the confusion.”

“Our research indicates that scores on the revised ACT writing test are performing no differently in comparison with scores on the other four ACT subject tests than they did on the previous writing test,” said Wayne Camara, ACT senior vice president of research. “Converting the writing scores to the 1-to-36 scale may have made the differences in scores seem larger or more obvious. This is really a perceptual problem that we are addressing.”

ACT is a mission-driven, nonprofit organization dedicated to helping people achieve education and workplace success. Headquartered in Iowa City, Iowa, ACT is the nation’s leader in college and career readiness, providing high-quality assessments grounded in more than 50 years of research and experience. ACT offers a uniquely integrated set of solutions that empower individuals with insights to succeed from elementary school through career. To learn more about ACT, go to www.act.org.