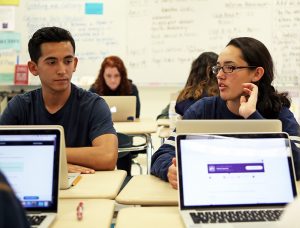 (The Colgate Maroon-News) By J.J. Citron.

The goals of the Common Core system are worthwhile. The initiative strives to create a unified curriculum in an attempt to increase workforce readiness. However, in the process of standardization, states have been subjected to excessive pressures. Obama’s Every Student Succeeds Act (ESSA) replaced and updated the NCLB; ESSA was signed into law December 10, 2015. This act rolls back much of the federal government’s involvement in education policy, on everything from testing and teacher quality to low performing schools. States have increased leeway and control over public school curriculum. ESSA identifies the weaknesses in the Common Core system and works to combat the inherent flaws of public education standardization.

The ESSA takes full effect in the 2017-2018 school year. President Trump has taken a strong stance against a standardized education system. Therefore, the potential benefits of the ESSA could go unrealized if the Common Core system is to be gutted entirely. One of Trump’s campaign platforms included dismantling the Common Core. Contrary to President Trump’s bold presumption, only the states, not the federal government, have the power to do this. Chad Colby, a spokesman for Achieve, a national nonprofit that helped develop the Core, stated, “it remains to be seen if the new administration will use the same federal overreach to try and get rid of the Common Core in states the way they accused the Obama administration of coercing states to adopt it.” Secretary of Education Betsy DeVos has a fluctuating stance on this matter. She was once head of the board of trustees of the Great Lakes Education Project, a strong Common Core supporter. But after being nominated for Secretary of Education, she spoke out against the initiative.