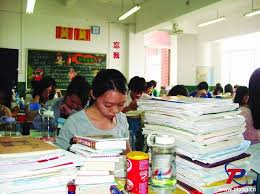 Hu Huifeng, an 18-year-old high school senior from China’s Jiangxi province, is on a strict regimen. Seven days a week she rises by 6 a.m. for a day of classes in Chinese, English, mathematics, chemistry, physics, and biology, with the last one finishing at 9:50 p.m. “Once I get home, I study until midnight,” she says.

Hu is among the 9 million students preparing for the biggest test of their life: China’s annual college entrance examination. Called the gaokao, or “high exam,” it will take place over nine hours on June 7-8 across China. It’s the culmination of years of memorization and test taking, capped off by at least 12 months of grueling preparation. With its roots in the imperial examinations that started more than 2,000 years ago, the gaokao decides what school you go to and what career you might have, says Xiong Bingqi, vice president at the 21st Century Education Research Institute in Shanghai.

The gaokao is an especially high hurdle for China’s more than 100 million rural students, who already receive an education of far lower quality than their urban counterparts. A quota system for allocating coveted college slots by province, which greatly favors local students, also works against rural youth who often live far from the better universities and need higher test scores than local applicants to gain admission. That means urban youth are 7 times as likely to get into a college as poor rural youth and 11 times as likely to get into an elite institution, according to economist Scott Rozelle, a Chinese education researcher at Stanford. “The current system itself is unfair,” Xiong says. “Inequality is inevitable.”

The problem stems from household registration (hukou), which ties all social benefits, including education, to one’s hometown or village. The hukou forces most rural students, many of them children of migrant workers, to take the gaokao where their parents hail from, even if they’ve never lived there.

Hu’s father managed to keep her in school until sixth grade in Huizhou, Guangdong, where he was once a migrant worker and now runs a lighting factory. At the age of 12, Hu, like her brother before her, returned to her parents’ rural hometown more than 600 kilometers (373 miles) away to live with her grandparents in Jiangxi and go to high school. “We would have chosen for our children to be here if it was possible,” her father says.

The gaokao’s all-important role in admissions is being reduced by giving universities more freedom to choose students based on class grades and teacher recommendations. The authorities are ordering public schools in Guangdong’s Pearl River Delta and other regions to take in more migrant children and let them take the college entrance exams where their parents work. And the quota system is being tweaked to allow more students from the poorer central and western regions to go to better universities in the east.

The costs of migrant children entering new schools will burden local governments. And families in cities who have benefited from the unequal system are resisting change. When officials recently announced plans to allow 78,000 students from poor regions to enter colleges in the better-off provinces of Jiangsu and Hubei, protests flared. “Governor, come out!” chanted angry parents outside government offices in mid-May in Nanjing, Jiangsu. They worried that new students would harm their children’s university prospects, Chinese media reported. Local education officials later reassured parents that the numbers of local students getting into Jiangsu universities would not fall.

Some young Chinese feel the inequities keenly. “Students in Beijing can get into Peking University with lower scores than us in Jiangxi, but there’s nothing we can do,” frets Hu, who still aims for a top school. “Unfortunately, for many other ordinary students like myself, gaokao is the sole path to realize our dreams,” wrote Chengdu student Liu Yangxiu on WeChat. She was too busy studying to speak over the phone.

The bottom line: The role of the gaokao is slowly changing as colleges start to consider other criteria for admission beyond the test.