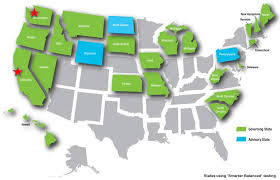 With states increasingly having walked away from the common-core-aligned tests developed by two federally funded consortia—especially at the high school level—one of those assessment groups is looking to hit the refresh button with a new type of test: one that is useful for both federal accountability and college admissions.

The Smarter Balanced Assessment Consortium put out a request for proposals on Monday seeking a partnership with a group that provides a college-admission test accepted by at least 200 colleges and universities—in other words, either ACT or the College Board, which administers the SAT.

The idea is to create a hybrid test that would give students both a Smarter Balanced score and a college-entrance score (though the RFP notes other innovative solutions will be considered).

“The only thing surprising to me about this is that it didn’t happen sooner,” said Chris Domaleski, an associate director of the National Center for the Improvement of Educational Assessment, a nonprofit consulting group that is not involved in the effort. “I think it is a very clever idea for Smarter Balanced to explore the potential for collaboration with a college-admission test provider.”  Read the full article