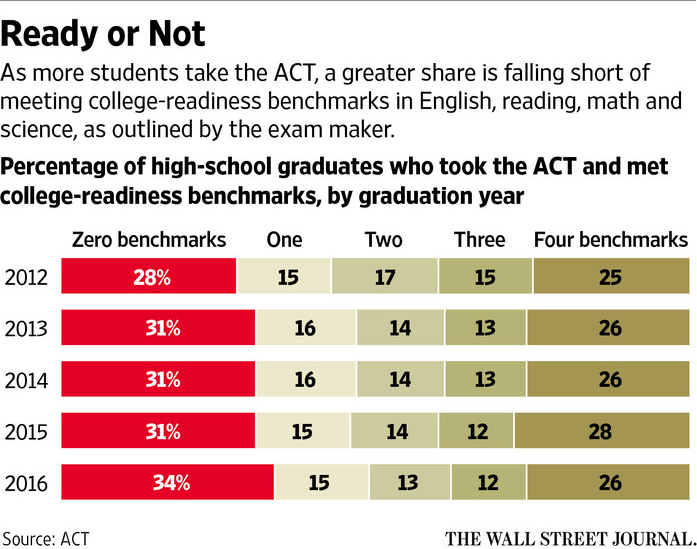 More high-school graduates are taking the ACT college-entrance exam, as states push students to consider their options for higher education. But the test results show a growing portion aren’t actually ready for college.

Sixty-four percent of 2016 high school graduates sat for the standardized test, up from 49% in 2012. The jump comes as more states—including Mississippi, Nevada and South Carolina—require districts to administer the tests, in the hope of increasing students’ awareness of college pathways.

Yet as the pool of test-takers better reflects the population of high-school students across America, and not just a self-selecting group of driven young adults for whom college is an automatic next step, it reveals significant shortcomings in their educational achievement.

According to the Iowa-based nonprofit organization that produces and administers the ACT, the percentage of 2016 graduates who met college readiness benchmarks in English, reading, math and science fell to 26% from 28% among 2015 grads. The number that met benchmarks in three areas remained flat at 12%. But those who failed to meet any of the benchmarks rose to 34% from 31%.

Readiness measures are based on results in subject-area tests that represent the score needed to have a 50% chance of obtaining a B or higher, or a 75% chance of getting a C or higher, on a corresponding first-year college course. For example, the group says, a high school student would need to score at least a 23 on the science section of the test—on a 1-to-36 scale—in order to be deemed “ready” for a college biology course.

“College readiness as a goal has been out there for a while,” said Paul Weeks, senior vice president for client relations at ACT. “The fact that this has been a focus and yet we haven’t made great progress by some measures is concerning.”

The average ACT composite score for African-American students has been flat between 2012 and 2016, while it dropped by 0.2 points for Hispanic students. And though average scores increased for students from families earning at least $80,000, they fell for lower-income families, which comprise a growing proportion of test-takers thanks to the statewide mandates.

Sixty percent of this year’s Asian-American graduates who took the ACT met at least three of the benchmarks, while 49% of white graduates did and 11% of African Americans did.

Mr. Weeks said he’s worried about what he called a “bifurcation” in results; though he’s pleased the share of students meeting three or four benchmarks of readiness is increasing, he said, the proportion meeting none “continues to creep up at an alarming rate.”

Mr. Weeks said that scores often decline right after test-taking goes statewide and the pool of test-takers broadens, but generally level out after a few years.

The ACT is taken by students in every state, but historically was more popular in the Midwest. More than three-quarters of this year’s graduates in states including Hawaii, Florida and North and South Carolina sat for the test, and virtually all who graduated from high school in Alabama, Colorado and Michigan did.

The ACT overtook the SAT as the most popular college-entrance exam in 2012, and has widened its lead as test-takers and school administrators question the SAT’s value as a measure of college readiness. The SAT announced a revamp in 2014, aiming to better assess merit rather than access to high-cost preparation. Both of the high-stakes exams have struggled with security issues, particularly overseas.