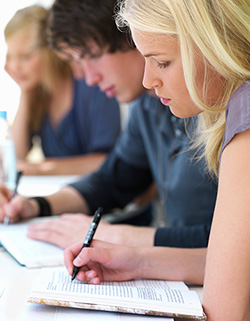 High school juniors across Ohio will take an ACT or SAT college-entrance exam this spring to fulfill a state mandate that requires public school districts and charter schools to give one of the two tests to nearly all 11th graders.

This year’s junior class is the first group of Ohio students who must sit for one of the exams that famously feature multiple-choice answer bubbles, though the testing requirement has been in the works since a 2014 state education law update.

With the new directive, Ohio joins Michigan and a growing number of states that require high schoolers to take a nationally standardized test that measures college readiness.

The decision has garnered mixed reactions from students and educators across northwest Ohio as districts from Perrysburg to Port Clinton prepare for the big-stakes test.

The state touts that it saves students money because Ohio is picking up the $5.25 million tab for about 117,000 students to take the ACT and 14,000 to take the SAT.

“It’s nice that we don’t have to pay for it the first time,” said Emily Mitchell, a 16-year-old college-bound junior who will take the SAT with her Perrysburg High School classmates on April 5.

Some students who may not have planned to go to college may reconsider if they score well on a test they wouldn’t have otherwise taken, educators said. Plus, posting an acceptable score on the ACT or SAT also is a new way high schoolers can meet Ohio’s graduation requirements.

But, there’s also concern about how the requirement piles onto the heap of tests students already take and the time it robs from classroom instruction.

Some question the logic of forcing such a tough test on high schoolers who plan to enter the work force instead of college.

Only 55 percent of Ohio’s high school class of 2015 took the ACT, and 7.2 percent took the SAT, according to the most recent data available from the Ohio Department of Education.

“I think for those kids that were probably never going to take it, they are probably not interested in it,” Rossford High School principal Tony Brashear said. “For us, we’ll see how they utilize their time on that day to see if they zip through [it] or give it a shot.”

Maumee High School juniors will be among the first to tackle the new challenge when they sit for the SAT on Wednesday. Perrysburg and Toledo juniors will take the SAT on April 5.

About 95 percent of districts chose to administer the ACT, a mainstay for many Midwestern high schoolers and college admissions departments.

Ottawa Hills, one of the few districts opting to give the test on computer instead of paper and pencil, will give the ACT to juniors on March 22.

Port Clinton, Rossford, Lake, Napoleon, and most Oregon juniors will take the ACT on April 19.

The SAT also offers online test preparation through the nonprofit Khan Academy, and Toledo students are familiar with the exam’s format because they’ve taken the PSAT, a preliminary SAT, the last few years.

About 1,321 Toledo juniors will take the SAT — everyone except those students with significant cognitive disabilities. Eleventh graders are the only high schoolers who will report to school that day. Freshmen, sophomores, and seniors will stay home, freeing up teachers to help proctor the test.

Starting with the class of 2018, Ohio offers three ways for students to fulfill graduation requirements.

One route to graduation is to score enough points on seven recently revamped end-of-course state tests — two in English, plus a test in biology, algebra, geometry, American government, and American history.

Or, those planning to go straight to a job can receive an industry credential and pass a work-readiness test to graduate.

Now, students have a third option if they score high enough on the SAT or ACT.

The state is still determining the score needed on the new SAT test, but officials said it will be equivalent to at least a 430 in writing, a 450 in reading, and a 520 in math on the former test. The top SAT score in each section is an 800.

Neither the SAT nor ACT tests paid for by the state will include those exams’ optional essay sections, which some colleges require or recommend applicants to complete.

Many educators doubt that students who haven’t scored enough points on the state’s end-of-course subject tests will manage to achieve graduation-ready scores on difficult college-entrance exams.

“It’s out there being sold as another option. It’s great for the kids who were going to take the ACT,” Lake High School principal Lee Herman said. “I don’t know that this is really creating an additional pathway to graduation.”

TPS plans to offer a SAT prep class next year to help students get ready for the new requirement.

This year, teachers are providing help as time allows.

Many students are retaking Ohio’s end-of-course state tests in order to boost their scores to meet the new graduation requirements, so Waite High School is piloting a new class geared toward the English tests.

After students retake the state English tests in March, the Waite class will work on SAT skills in advance of the April test.

It adds up to a lot of tests and test prep.

“It takes a lot of studying,” said Dalon Law, a 16-year-old Waite junior.

He is preparing now for the English tests, then will switch to the SAT. He wants to go to college, so he said he’d likely have tackled a college-entrance exam regardless of the new requirement.

The practice SAT test he’s taken seemed a lot like all the other exams he’s faced, “just more questions and harder questions,” he said.

Waite junior Courtney Miller, 17, is in the same position. She’s preparing to take more state tests for graduation, the SAT, and balancing that with regular classes.

It is sometimes stressful “trying to focus on everything at once,” she said.

In previous years, roughly 250 of a typical 400-member Perrysburg class took the SAT, ACT, or both tests, she said. That means roughly many more students will take a college-entrance exam this spring.

Kristina DeMarco, a 16-year-old junior who plans to play soccer at the University of Dayton, said she’s picked up tips such as how long she should spend answering each question.

Like her classmate Emily, she’s already taken the ACT but planned to take the SAT as well.

“I want to take both just to see which one I do better on,” Kristina said.

At Springfield Schools, test-day logistics include figuring out if teachers can provide graphing calculators to all test-takers, because many more juniors are taking the ACT now.

Before it became a requirement, a little more than half of Springfield students would take the test, said Dana Falkenberg, director of curriculum, instruction, and assessment.

“We are trying to figure out, how do we help them,” she said.

Mark Brahier, who founded the POINTS Test Prep service based in the Toledo area, thinks the best preparation for the ACT and SAT occurs in the classroom. He offers tutoring and works directly with school districts.

He advises students to become familiar with the test before they sit down to take it, and said pacing under time pressure is often “the biggest issue.”

High schools that prepare students for the test remove socioeconomic barriers that prevent some students from getting help, he said.

“My concern is those students who don’t have access to preparation,” he said.